Happy New Year! What brave new worlds lie ahead for you in 2014?

We have just come back from a fabulous holiday around the central and east part of SA. December was a whirlwind of activities and explorations. We enjoyed a mini-week at a reserve called the Pilanesberg where game sightings were abundant and our family was able to spend some quality time together. 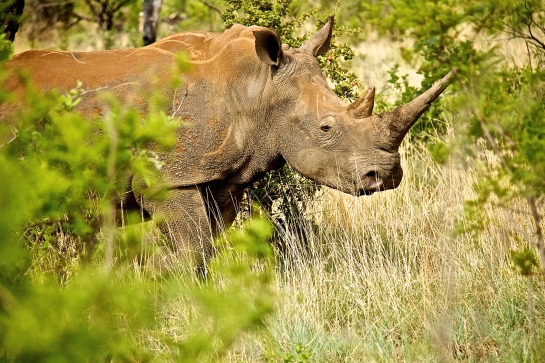 Then Christmas was spent braaiing (outdoor BBQ meals), playing in pools and visiting with friends. It was a blur as we returned from the Pilanesberg on the 22 and then had to finish getting ready for Christmas. We began a new tradition this year with the children making their gifts for each other. E found and printed  pictures of characters from a game D likes on the internet. She then painstakingly glued them to cardboard, cut them out and decoupaged them into action figures D could play with. D browsed the internet with me and selected the idea of creating a Horse sock puppet for E. He helped sew buttons on for the eyes and yarn for the hair. It was great practise for his fine motor skills and creativity!

On Christmas Eve the children all acted out the Christmas Story for the adults. They did a very good job with E and her friend C actually creating a script from their bibles that included a portion of the magnificat. E was the angel Gabriel and took her role very seriously.

The boys were sheep and shepherds and although a bit silly they managed to do their part. Boxing day we packed our car and after a delay waiting for AAA to come and give us a boost, we were off to explore the beautiful Drakensberg Mountains.

We enjoyed some lovely hiking, gourmet meals, swimming in the Cascades which is a series of natural pools and low waterfalls and capping it off with a night at an historic site from the Anglo-Boer War called Spionkop. This battle is of particular interest as it was a phenomenal failure of the British and a false victory for the Boers. There were also several prominent historical figures present such as; Winston Churchill who was there as a courier and war correspondent, Robert Baden-Powell, a commander, and Mahandas Ghandi who was a stretcher-bearer! (http://en.wikipedia.org/wiki/Battle_of_Spionkop)

We spent our last morning in the mountains at the Kwa Cheetah Breeding Project on the Nambiti Private Game Reserve.(http://www.cheetahinteraction.com) The program director explained that Cheetahs are actually more endangered than rhinos. Sadly they are killed for their beautiful fur and are suffering from encroachment on their natural habitats.

There was also a tame meerkat on the property that named Zulu. She was very friendly (especially to girls) and spent quite a bit of time cuddled up with E and I.

The really funny thing about Zulu though, is that she helped foster a wounded cub in the breeding program. The cub, named Yakira, had been stepped on by her mother when she was 4 days old which broke her shoulder. As Cheetahs rely on their speed and agility to hunt, she could never survive in the wild so the program hand-raised her and she is now their tame mascot. I don’t know if there has or ever will be again a cheetah that behaves like a meerkat but this was definitely a sight to behold! 🙂

She was a very calm animal and although we didn’t let little S wander about on his own, she was purring and enjoyed being petted by the visitors.

From the rainy, cool mountain heights in the “Berg”as it is affectionately called, we drove around the edge of Lesotho and descended 1600m to the Indian Ocean.

We spent 4 wonderful days with dear friends in Ballito playing at the beach, trying local cuisine and most importantly reconnecting with these special people. We celebrated the New Year with them, eating, laughing, swimming and dancing the night and the old year away.

It was a poignant moment at midnight to be with these treasured friends from our past singing Auld Lang Syne together and welcoming the promise of a new year. 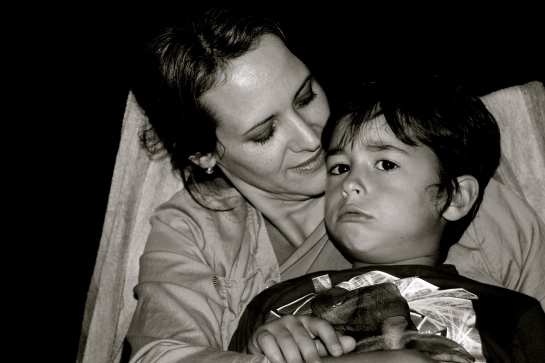 We reluctantly repacked our car to head out on the final leg of our journey. Our destination was Hluehluwe/ St. Lucia, the oldest game reserve in SA, located in the northern Natal, also called Zululand. Unfortunately, Hluehluwe was a bit of a bust with mediocre accommodation, expensive park fees, and difficult terrain for game spotting. Our final day at St. Lucia, however, was incredible. We signed up for an all- day safari that included game drive through the wetlands, snorkelling at Cape Vidal and finished with a Hippo and Croc boat cruise in the estuary. It was a truly epic day and redeemed our frustrating time at Hluehluwe. St. Lucia is a laid back holiday village filled with B&Bs, self-catering cottages/ apartments and restaurants. It is also a world heritage site with an estuary and inland lake that stretches for 350km and is home to literally thousands of Nile Crocodiles and Hippos. (http://www.isimangaliso.com/index.php) The governments of  SA, Mozambique, Swaziland and Zimbabwe(?) have agreed to create a new protected corridor by 2020 extending from ISimangaliso Park north to Mozambique and Zimbabwe which will allow indigenous animals to migrate from the dry savannah to the coastal regions and back again. It’s inspiring to hear the pride in the rangers voices as they talk about this ambitious project and I can’t help but be proud of the African people for showing this commitment to protecting their beautiful land and animals! 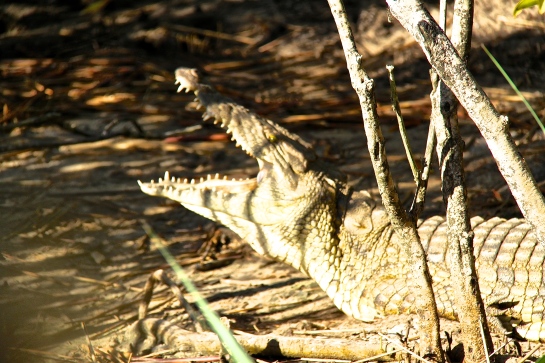 Can you spot the crocs? 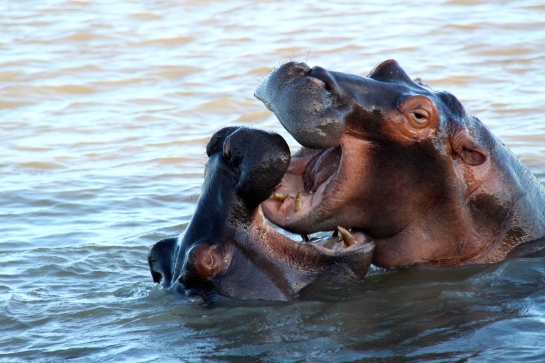 These are hippo teeth!

My final day in St. Lucia started with a walking bird safari at the crack of dawn. We have all developed an interest in birding since being here and are amazed at the diversity and beauty of the birds we have seen. This is a Southern Red Bishop Weaver: 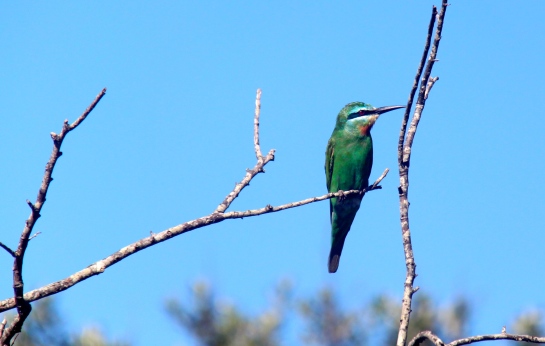 We are now settling back into our house and routine and are moving boldly forward into whatever the new year brings. We have resolved as a family to keeping better track of our working time and to be more mindful of the way we speak to each other. We also intend to be more disciplined in our health routines and achieve a better lifestyle in the coming year.

Do you make resolutions? What is your greatest success story?

We arrived in Jo’burg a week ago and after a day of adjusting to the new time zone and repacking our things we headed off to a bush lodge in the Limpopo province. It was  perfect introduction to Africa with a relaxing environment to reconnect with old friends and make new friends all at the same time! The kids have loved every second of our trip so far and despite my Canadian mama fears of Mozambique spitting cobras and Black Mambas lurking in each patch of tall grass, I managed to chill out and let them follow the lead of their African friends! I even managed to work up a bit of courage and do some things outside of my comfort zone too!

This is a lovely example of some of the Afrikaans architecture:

And this is a pic of a shantytown we passed along the road, a sad reality in this land of contrasts.

To heighten the contrast we arrived at our lovely lodge in the bushveld with all the trimmings.

A full African moon rising over the mountain: 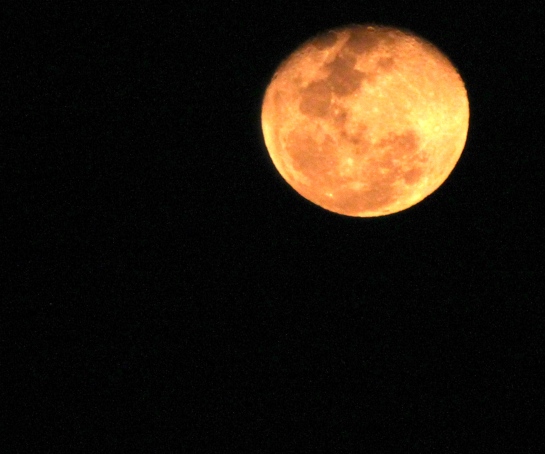 A herd of Red-faced Hartebees:

Zebra in the bush:

The camp we were at was full of hiking an mountain biking trails so off we went to explore a trail to a lookout. 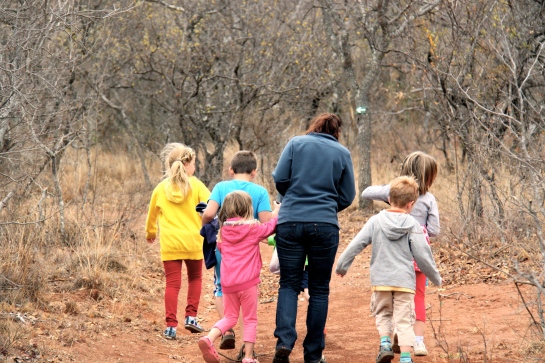 Everybody had heir binos for spotting game!

Sitting atop a cairn at the lookout 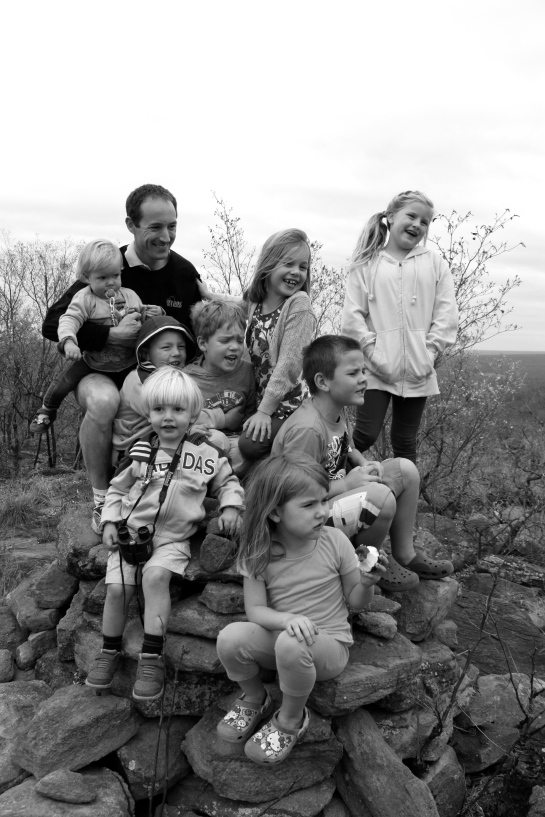 A porcupine quill, quite a bit bigger than it’s Canadian counterpart!

Our hosts made us a  traditional Afrikaans dish called Potjie, which is cooked over a low fire all day in a big 3 legged cast iron pot

E and her old and new friends

A group of Impala bucks at sunset

The only clear shot I could get of the baboons, even though at one point they were bedding down for the night near our supper picnic site!

And the beautiful giraffe! They are so unusual looking; somehow awkward and graceful at the same time! 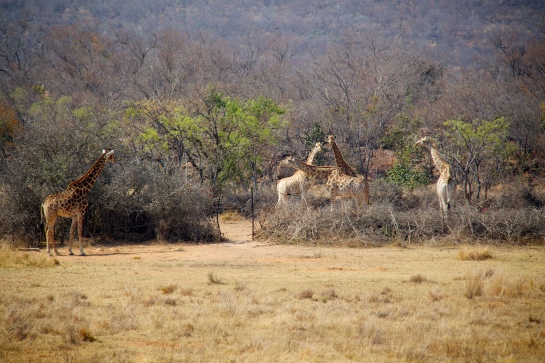 Finally the brave safari club driving round the bush and waiting for Mom to take the pictures!

After a hiatius that took us almost through the end of July, here I am on July 30th and expanding the scope of this blog. This started as a way to track our weekly homeschool activities and report to our teacher, however, as our learning journey is so much broader than school I want to cast our blog net a bit wider. It is a time of plenty in our temperate coastal region. We’re in the midst of summer and my garden is producing all kinds of bounty. Having lived in the urban core of a couple of major Canadian cities for the past decade, this life in the burbs is GOOD! I have a garden, I have fruit trees and I have a kitchen I can bake in! This week our neighbour’s plum tree is loaded with beautiful golden plums and luckily for us, there are several branches that extend waaaay over the fence 🙂 I don’t know what variety they are but they are almost like small soft and very juicy nectarines but more tart in flavour.

After eating rather embarrassing numbers of plums fresh off the tree, the pertinent question has been “What shall we do with all these plums?” An on-line search revealed a few recipes and many recommendations for drying or canning them. Alas, we have no dehydrater or canning pot so I have decided to freeze some and bake like crazy. The first item on the list: Plum Upside Down Cake. I found the recipe here: http://www.simplyrecipes.com/recipes/plum_upside_down_cake/ 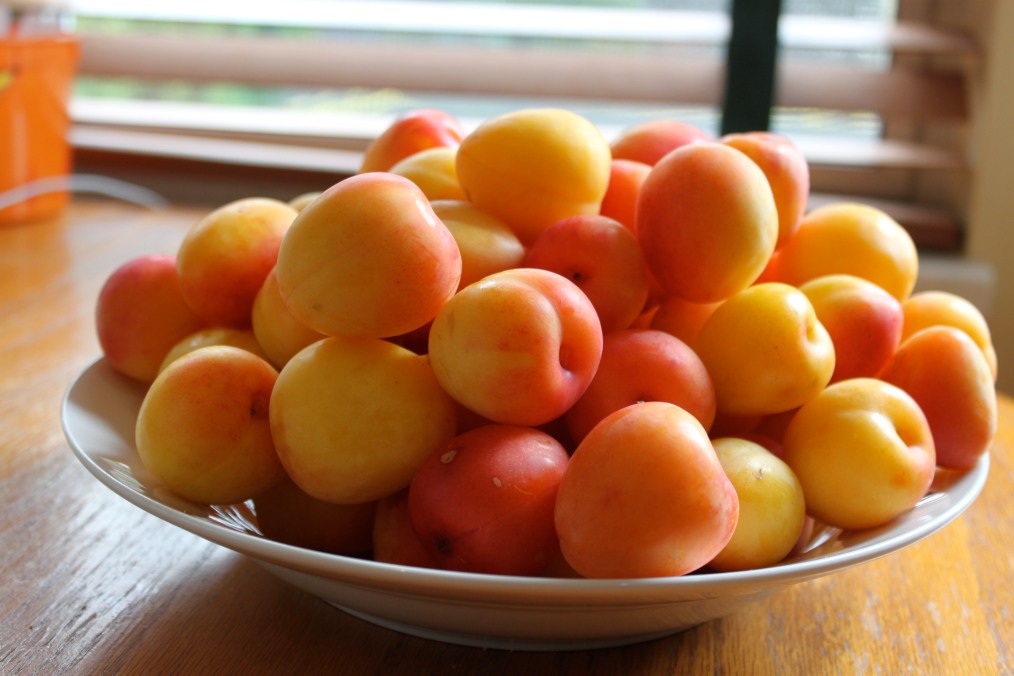 Step 3: Make a caramel sauce to put in the bottom of the cake pan

Step 5: Make cake batter and pour in on top of plums